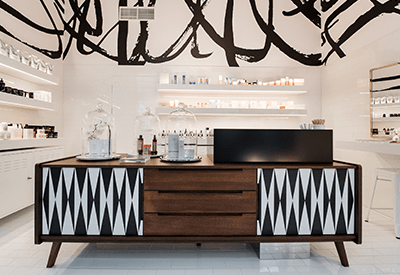 The Lab Store is a beauty concept store located in the center of Zagreb.

It provides a home for the most desirable beauty brands and products adored by celebrities and carries products published on the lists of the world’s most famous magazines and websites.

The Lab places special emphasis on ‘clean beauty’ brands like Odacite, Kahina Giving Beauty and Agent Nateur just to name a few, and is a very proud representative and distributor of Augustinus Bader in the Adriatic region.

Tatjana Dragović is the founder and owner of The Lab Store, and is also one of the most successful Croatian models of all time.

Tatjana Dragović graced the world’s fashion covers, including magazines such as the French Elle, American Cosmopolitan, Women’s Health, Flare, Maire Claire, as well as the covers of Croatian magazines, including Elle, Storybook and many other lifestyle and fashion magazines.

She is an advocate for all things natural, healthy and organic, and believes every individual has a role to play in protecting the planet for the future and adopts sustainability practices when possible.

Sign up to get our latest blog posts, launches, updates and special offers delivered to Your inbox & enjoy 5% off your first order!

We use cookies to ensure that we give you the best experience on our website. If you continue to use this site we will assume that you are happy with it. Privacy policyI agreeI refuse